Mount Zion Faith Ministry movies of the late-nineties and early-noughties usually had Mike Bamiloye donning nearly all the crowns. I for one, grew up thinking that seeing ‘Written, Directed & Produced by: Mike Bamiloye’ was as normal as the logo of the Mount Zion Faith Ministries on the jacket of their movies. Not until 2008 when A Change of Taste, written by Joseph Yemi-Adepoju brought a change of taste. 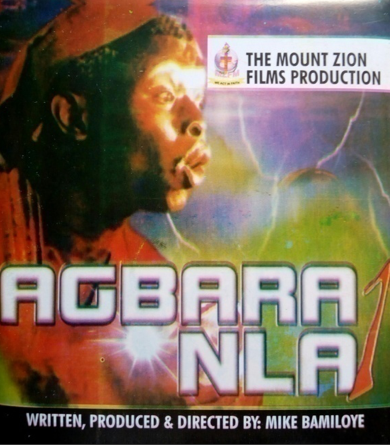 See what I mean? Oh I forgot to add that he was usually also one of the lead actors

In recent times (about the past 3-4 years) however, Mike Bamiloye stopped taking on major roles and even when he takes a role it’d be a cameo; probably a pastor like we have in House on Fire, or a doctor (who doesn’t even have lines) like we have in Life of the Billows. Asides that, his scripting and directing of movies dropped drastically and this hiatus leaves us clamoring for what used to be. So, news about Abejoye –a collaboration between Mount Zion Faith Ministeries and Flaming Sword Film Productions, which isn’t just written and directed by Mike Bamiloye, but also has him as the protagonist- meets us with excitement and fevered anticipation. Especially because it has him on a role that rouses nostalgia as memories of movies like Esin Ajoji, The gods Are Dead and a myriad of others, creep up on us. Which is why when I realized that I’d be unavoidably missing the last edition of the drama ministers power night in 2017, I was doubly pained ‘cos this movie which had my appetite whet was going to be premiered there. But praise be to our God of second chances, Abejoye was unspooled at Jogor Centre on Sunday, the 24th of December, 2017. And this time, I did well not to miss it.

How did I find the movie, Abejoye? That’s what we’re here to discover, but before we go on to my thoughts on the movie, how about we have the synopsis?

The eponymous character, Olayiotan Abejoye is from a lineage of kingmakers in Ajibogun town. He agrees with his son’s family to travel over to Texas where he’d be visiting with them, but not before he gets into a falling out with the Obaojebolos and earns their enmity and vehement promise to get back at him in ways that will affect him and his generation by his guts and his waspish tongue that spares no truth, no matter how stinging. On the other hand, Bamidele (Baba Abejoye’s son) and his family are slammed all over by harbingers prior to Baba’s visit and this continues, shaming their endless prayers and fasting.

Baba’s visit would trigger a chain of hot events that would leave indelible marks on Bamidele’s family as well as Baba himself.

Abejoye is pregnant with a lot of messages. All of which it delivers successfully. Like I always do, I’d share few;
-When you don’t depend on the leading of the holy spirit, the enemy will keep you well occupied fighting the wrong battle.
-You will never conquer by fighting the right battles with the wrong (carnal) weapons.

Mike Bamiloye plays Baba Abejoye excellently. He infuses a heavy doze of humor into his character without trying too hard, and without making a farce of the character. The consistency of the character makes it seem all so natural and we can’t get enough of its laughable ways.
Bamidele and Laide, his wife are played respectively by Wole Adeyi and Gloria Bamiloye, Adegbenga Aboye stars as the pastor while Bambo Adeyi stars as Dedun. They all fill the shoes of their characters satisfactorily. Anjolaoluwa Adeyi and the other two boys who play Diwura, Gboyega and Mokolade are great. Isaac Femi-Akintunde and Idowu Oluwaferanmi act as Oluoje and Iya Akesan, the Obaojebolos respectively and the both of them are just in their elements. No actor puts up a subpar performance and for this we are grateful.

In writing the story, Mike Bamiloye is thorough and purposeful. He creates characters that are as credible (even when they do incredible things) as they are consistent. He makes sure to give every necessary detail so much that it’s almost overdone and it makes the story not just understandable but come alive. Although some scenes could use a little more brevity, no one is irrelevant. The plot build up is steady, unhurried and the resolution leaves no bit untacked.

We get super duper exterior shots of the city of Texas on Abejoye as well as cool picture quality and camera works. I wish same could be said of the sound. The sound is crisp at some points while the timbre falters at some other points. I guess that’s what happens when we don’t have the tempered hands of Odusina Oluyomi on the boom. The editing is done with finesse (I like the wisps that rise each time Baba stamps his feet). The background music and sounds are soothing and fitting. Brilliant subtitling, big ups to whoever did that, You don’t know how many souls you saved.

Not more than five scenes after Baba Abejoye’s arrival we are made to know that he’s spent a week, then several scenes later we’d be told again that he’s spent less than a week. Also we don’t get any exterior/ establishing shot of Ajibogun town and this isn’t fair, especially because nearly each scene set in Texas is usually preceded by exterior/ establishing shot(s).

The movie would be screening at different locations all over the world during this festive season, you’d not be making a regrettable decision by choosing to see this movie. 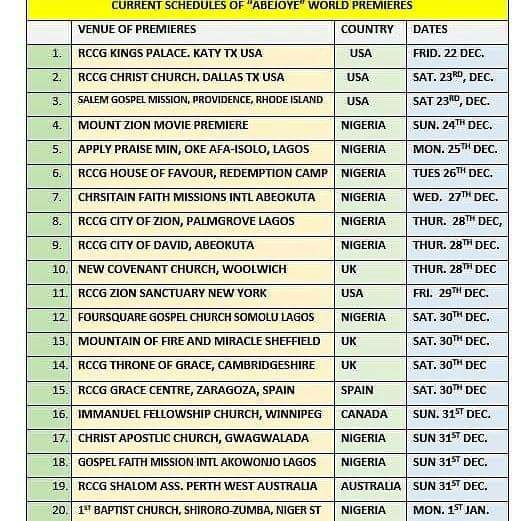 FOOT NOTE: It’s been an amazing year on the blog. All thanks to God and you, dear reader. It’s a wrap for the year, see you guys in 2018. Love you, every blessings.