ON REMORSE AND GUILT 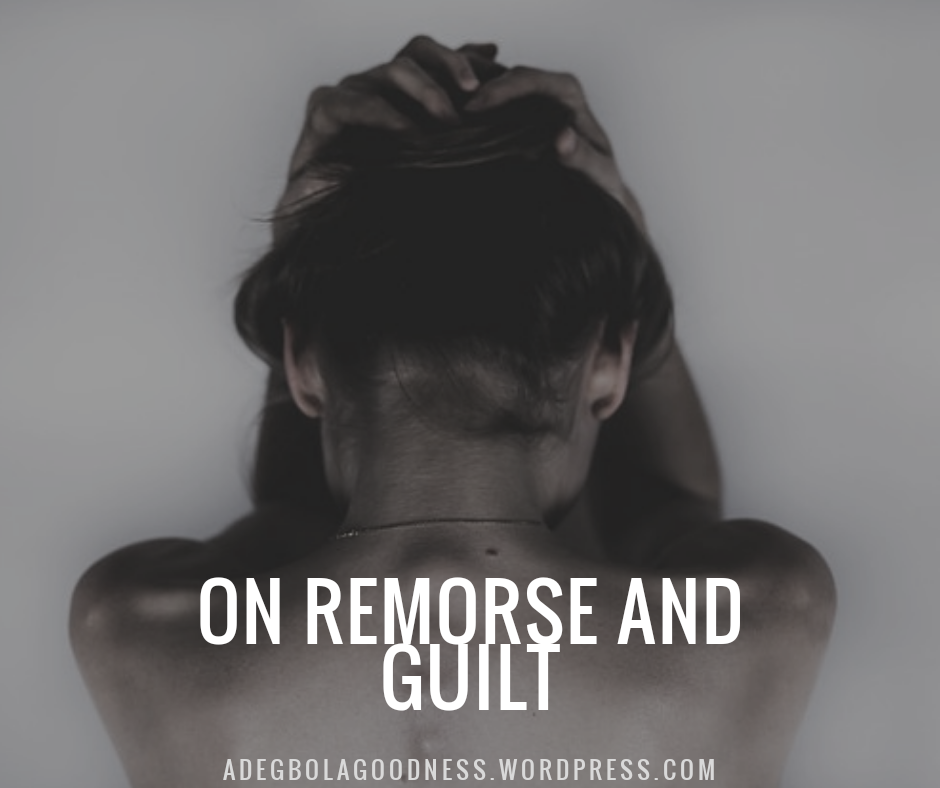 Remorse and guilt are words that could easily be mistaken to be synonyms, the kind of thing we have with happiness and joy or conviction and condemnation, when they actually stand at either end of the number line. One far on the positive and the other far on the negative.
Let’s start with the one far on the negative; guilt. Guilt comes as the thoughts that say,
“I’m too messed up to be anything different.”
“I’ve gone too far to be forgiven. I’ve failed God too many times.”
“Why should I go back to God when I keep going back to my vomit?”
Guilt makes you feel bad for what you have done and that’s all. Guilt is what keeps you feeling bad even after God has forgiven you. Guilt drives you farther from God. It’s a rocking chair that occupies you with wishes, you know all those woulda, coulda, shoulda thoughts. A rocking chair that tips you forward and backward and actually moves you no where. Guilt shows you that you are in a mess and does nothing or makes you do nothing to get out of it. Guilt is a waste of time, a waster of time, it leaves you drained, depressed, despondent. It leaves you writhing in quagmire, like a pig, wallowing in self-pity, self-loathe and everything unhealthy. Guilt is a salient tool in the hands of the Devil used in crippling many a believer.
Before we move on to the guy on the far positive, let’s take the scriptural reference for this article.
2 Corinthians 7:10
..For godly sorrow produces repentance leading to salvation, not to be regretted; but the sorrow of the world produces death.. NKJV
…Distress that drives us to God does that. It turns us around. It gets us back in the way of salvation. We never regret that kind of pain. But those who let distress drive them away from God are full of regrets, end up on a deathbed of regrets… THE MESSAGE
Guilt is the sorrow of the world as NKJV puts it and THE MESSAGE version further sheds light on it, guilt is distress that drives one away from God and it ends in regret and death!
Remorse on the other hand is godly sorrow. Like guilt, it makes you feel bad about your sin and or sinful lifestyle, but unlike guilt, it doesn’t stop there. It works repentance.
Godly sorrow makes you see your wrong and makes you learn from your mistake, shows you where you had refused to obey the Holy Spirit or walk in grace. It shows you or reminds you that you are not sufficient in yourself- else you would not have fallen in the first place- but that your sufficiency is of God.
Godly sorrow drives you back to God in genuine repentance. Godly sorrow never leaves you with regrets. Godly sorrow is the Holy Spirit’s tool for working repentance in us.
Guilt go hand in hand with condemnation, while godly sorrow goes with conviction.
John 16: 8 tells us that when the Holy Spirit comes, he would convict the world of sin and of righteousness. On the other hand, it is the Devil who condemns, he accuses hence his name ‘The Accuser of the Brethren’
I would quickly quote Joyce Meyer from her book How To Hear From God,
“Conviction is meant to lift us out of something, to help us move up higher in God’s will and plan for our lives. Condemnation on the other hand presses us down and puts us under a burden of guilt.”
The difference between the two, conviction and condemnation, is this; Conviction condemns sin and points the sinner to the grace and mercy available in Christ to overcome that sin while condemnation condemns the sinner.
Now, I have experienced both sides of the spectrum. I have wallowed in guilt and I tell you friend, don’t stay in guilt!
But there is a caveat, now that you know that guilt is a device of the Devil, the next likely thing is to build around yourself a shell against remorse, to harden your heart and silence your conscience, searing it, like the Bible says, with hot iron. I almost fell into that too. That too is a device of the Devil. The Bible talks about people being hardened by the deceitfulness of sin, that keeps you from experiencing godly sorrow and genuine repentance.
It would seem like some attention was given to the Devil and his tools today, which is rather unusual with me. But Paul says in his letter to the Corinthians, in 2 Corinthians 2:11 …Lest Satan should take advantage of us; for we are not ignorant of his devices…
We are not ignorant of the Devil’s devices! We, as children of God ought not to be. And this is not because we go about reading books or listening to sermons with titles that bother on things like ’51 ways to know the Devil’s devices’, but because we have the Holy Spirit, the great discerner of truth. As we relate with the truth of God’s word, we are able to discern and detect the Devil’s fibs and ruse.